I had the good fortune of traveling to London over the holidays with the USF Herd of Thunder Band. We were there so that the band could march in the London New Year’s Day parade, but we got to do a lot of sightseeing and tourist stuff. It was my first trip to England and, quite honestly, I didn’t know what to expect. I wondered beforehand what sort of reputation Americans have in Great Britain. (We don’t always come across well in today’s media, I suspect.)

Andy, our guide for the week, happened to mention early in our visit that he had noticed that the British likewise don’t fare too well in American television and movies. He commented that when a British character is introduced in a movie, he or she tends to be stuffy, “proper” and a little out of touch.

The folks I met during my visit (including Andy) weren’t at all like that but were instead very gracious and charming. I noticed that this innate sense of polite behavior seems to extend even to posted signs. For example, a loading dock in the building behind our hotel gently requested that drivers “dim headlights whilst waiting.” Subway notices seemed to be casual observations: “Improvement work to tracks & stations may affect your journey” and “Obstructing the door can be dangerous.” Even the posted signs at the lake in St James Park are understated in reminding dog owners to keep their pets on leashes “to avoid disturbing the waterfowl.” 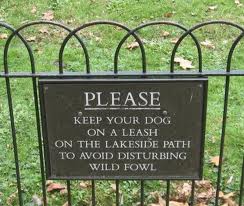 I thought there might be a few lessons to be gleaned from these novel posts and perhaps some reminders to carry into the year ahead.

On the one hand, we sometimes purposefully withhold very important information from those nearest and dearest to us.  (“If he/she/they REALLY cared, I shouldn’t have to tell them what I need.”)

I guess mind reading does work well in some households.  Not, however, in most.

On the other hand, when given the right opportunity most of us present WAY too much information, drowning our children, spouses, students, committee members, employees, or other captive audience in a lot of useless details that really don’t matter to anyone but give us a chance to just keep talking.

Londoners have the right idea: give folks exactly the amount of information they need when they need it most.

While we were there I never figured out which direction would be oncoming traffic (since cars there drive on the “wrong” side of the road, according to American sensibilities) and if left alone I would probably never have known when it was safe to cross an intersection. Fortunately for me, when there was no pedestrian cross light in a London intersection all you had to do was look down at the curb. There you would see painted bold letters telling you exactly in which direction to look for cars before stepping out in the street.

Exactly enough necessary information. Not at all too much.  If only we could communicate so clearly to those around us…

One of our common American traffic signs demands that drivers “Yield.”  The equivalent sign in London simply asks you to “Give Way.”  Move aside.  Let someone else ahead if needed, rather like letting another group play through on a golf course.

When I read that something “gives way” I usually think of collapse or surrender: “When the piano bench suddenly gave way under her weight, Margaret found herself sitting on the floor.”  However, consider “Give Way” as letting others go first.  Letting that other shopper ahead of you at the grocery store.  Letting someone else talk while you really listen (instead of just waiting for your chance to grab the conversational reins again).  And, of course, letting that other driver slip in before your car on the highway.

This was probably my favorite.  When riding the subway, the recorded voice announcing each station along the way frequently will remind passengers to “mind the gap between the train and the platform.”  Watch your step, we might say.  “Mind the gap,” for me, conjured up the very concept of mindfulness.  The idea that, no matter how tired I might be at the end of a long day, no matter how my feet might be hurting or my packages getting heavy, I was encouraged to consider carefully where I was and what I was doing.  Pay attention.  Be present.  Engage.

As a new year begins, remember to:

And safe travels on the journey ahead….

← Chapel Center History: Church on the Campus
Picture This: Putting the Pieces Together →