We are getting ready for the new school year, looking ahead to November 17, 2012, which means we are looking back 50 years to the original founding of the USF Episcopal Chapel Center on that date in 1962.  Looking over old photos and chapel records may give a sense of the historical narrative of the place, but the story of the Chapel Center really has to be interpreted in a much larger framework.  The opening of the Center in 1962 occurred, after all, just a very few years after 1956, the year that the University of South Florida opened.

USF currently boasts a campus enrollment of 40,429 students, with a total of 47,576 students on four campus locations.  The USF campus covers more that 1,700 acres in Tampa and also sponsors more that 60 study abroad programs in 25 countries.  The university has received many accolades for its various academic programs as well as athletics. (Go Bulls!)   According to a recent article in the Tampa Bay Times, a student can currently expect to pay an annual whopping $20,000 to attend USF.

In the opening convocation for that first year, Florida Governor Collins said the following in his speech:

“A curious manifestation of our time is the ‘beatnik.’  I am not a specialist on this subject, but I do not think beatniks are merely reacting to or protesting against what they consider to be wrong values of our society, as some would have us believe.  They seem rather to represent an astonishingly stupid and egotistical rejection of our entire culture without making any meaningful effort to effect corrections of what they regard as wrong…..The beatnik is rejection and withdrawal into self in an obvious form.  But we have more beatniks in America than you will find wearing  beards and dirty clothes in coffeehouses.  The same egoism and self-centeredness is also found in people living in ranch-style houses and driving expensive cars….The extreme of these citizens say unto themselves:Nothing in this world is really worthy of me.  Some of the less extreme will say that nothing is worthy of me but my family, or my business, or my profession.”

He ends his speech with:

“Seek out the opportunities for leadership through which you may repay society and enrich the democratic process which has made it all possible.  This, students, will be Florida’s claim upon you.”

Though USF was promoted as Florida’s first “urban” university, the reality was somewhat different.  Margaret Chapman, first Director of Student Personnel, has said:

“Urban, my foot, this place was as rural as you could get.  There were more owls here on campus than there were students.  It took the hunters a while to realize it was permanently closed season on hunting here.  Every once in a while a bullet would zing across the mall.” 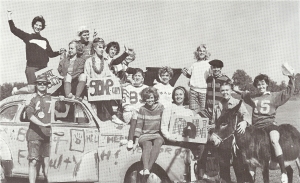 Among the pressing issues of the day was the dress code.  Females started wearing shorter skirts.  (“Short” meaning above the knee.)  One male student is recorded as complaining: “I don’t like to look at the back of girls’ knees.”  A female student also responded: “No one has beautiful knees.”  In 1961, a campus event later dubbed “The Shorts Riot” took place, in which fifty students marched in protest of the dress code, an apparently ongoing sore point in adminstration/student relations.

In 1962, power was cut around campus at midnight on March 4-5 and resident males staged a “panty raid.”  150 male students gathered in the parking lot of Alpha Hall, talking and setting off fireworks. The crowd dispersed around 2:00 a.m. when power was restored.  Everyone seemed to have enjoyed the event and one female student was recorded as saying:”You men should do this more often.”

In 1963, plans were announced regarding the creation of gigantic fallout shelters under the Chemistry, Library, Alpha Hall, and Teaching Auditorium buildings.   The Cuban missile crisis served to push the plans forward and, altogether, five shelters were built to house 4,000 people.  Supplies were donated by the local Civil Defense organization, with food supplemented by donations from Morrison’s.

In 1964, USF students protested to Life magazine that they had invented skateboarding, not university students from California.  USF publications had apparently documented the craze at USF prior to Life magazine’s coverage of California skateboarding.  Skateboarding was so popular on USF’s campus that the Residence Council took measures to limit the activity to certain time slots in an effort to curb the disruptive noise on campus.

And, in 1962, in the midst of all these highly diverse activities, the USF historical timeline records: “The Right Reverend William L. Hargrave delivers the sermon at a ceremony to dedicate the Bishop William Francis Moses Episcopal Center on the USF campus.”

The Episcopal Church in southwest Florida was at this time part of the burgeoning Diocese of South Florida.  The post-WWII population was booming in Florida and the Church likewise enjoyed this growth.  (At one time during the 1950s, a new congregation was being created every six weeks!)  Bishop Martin J Bram was elected suffragan bishop in 1951 and served until 1956, when he died suddenly from a heart attack.

Bishop William Francis Moses, who followed him, established and even designed the Chapel Center.  Unfortunately, in 1961 Bishop Moses also died suddenly from a heart attack, not living to see the Center which originally bore his name.  Bishop William L. Hargrave, elected as suffragan bishop for the newly formed Gulf Coast Archdeanery, officiated at the dedication service for the new Center on November 17, 1962.

Next up: a look back at the early days of the Chapel Center.  If you were a part of this fledgling church and have stories to share, I’d love to hear from you!