The Chapel Center @ USF has an outdoor labyrinth (pictured left).  It is in the middle of an open field by a busy highway, usually baking under scorching Florida sunshine, unused and virtually ignored except for an occasional mowing to clear stray weeds.  One of my proposed projects for the upcoming school year (assisted by the creativity and manpower of returning students, of course!) is to do something so that our labyrinth becomes more useful and used.

Which of course begs the question: what exactly is a labyrinth, how is it used and why is it useful?

If you look up “labyrinth” as a subject, most commentaries start by referencing King Minos of Crete who, according to Greek historian Herodotus (c. 450 B.C.), commissioned inventor Daedalus to design a labyrinth to house the monster Minotaur.  (Daedalus, you might remember, was also the inventor who designed wax wings for his son Icarus with tragic results.)

Daedalus’ labyrinth was purposefully designed with false turns and dead ends so that those who entered could not escape and would became human sacrifices to the monster.  Daedalus’ labyrinth is actually a misnomer: it was in fact a maze, a multicursal construction with many entrances and many choices, many of which are wrong turns and lead to dead ends. 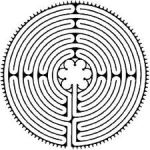 A labyrinth, on the other hand, is a unicursal design with one entrance, leading in one direction.  The user moves back and forth in a series of curves, arriving at the center and then repeating the process to travel out to the edge.

This unicursal design was used in many ancient cultures, from Egypt and Etruria, where its orderly design was thought to keep evil spirits from tombs, to Rome, where it was used as a test of skill for horseback riders.

The labyrinth used in some churches today is more directly related to those found in cathedrals in the Middle Ages, the most famous of which was built in Chartres Cathedral around 1200.  These labyrinths were embedded in the cathedral floors and served as a devotional substitute for a pilgrimage to the Holy Land, a journey which was too expensive and difficult for most would-be pilgrims.

By the 17th century many of these cathedral labyrinths had been removed or destroyed.  We aren’t sure exactly why.  Some historians have suggested that the original purpose had been forgotten.  One cathedral canon from the mid 1600’s is quoted as saying that the labyrinth was “a senseless game, a waste of time.” It may have served as a distraction during Mass–sort of an indoor hopscotch for children.  Or perhaps the pervailing atmosphere of Rationalism and Enlightenment caused folks to determine that the symbolism of the labyrinth was no more than a holdover from a superstitious past.

Whatever the reason, labyrinths disappeared for many years, only to be reintroduced in the 1990’s.  They can now be found in churches, retreat centers, community centers, health spas, and tourist resorts.

It is interesting to me that, in researching this post, the most complete and thorough article I located was not from a theological or religious publication but from the Gale Encyclopedia of Alternative Medicine.  “Walking the labyrinth” is believed to have many benefits to the user; the chief of which being that it allows the user to temporarily suspend “left brain” (logical, analytical, fact-based) activity while encouraging “right brain” creativity, imagination, and intuition.  This can result in: finding answers to personal problems, developing a sense of inner peace, reawakening an interest in personal religion, an improved ability to manage pain, and faster healing from injury or surgery.

(I myself would settle for just a small break from monkey brain.)

According to one writer from the National Catholic Reporter: “The labyrinth is a universal symbol for the world, with its complications and difficulties, which we experience on our journey through life.  The entry to the labyrinth is birth; the center is death and eternal life.  In Christian terms, the thread that leads us through life is divine grace.  Like any pilgrimage, the labyrinth represents the inner pilgrimage we are called to make to take us to the center of our being.

Sounds like a college campus is a perfect place for a labyrinth!  I look forward to finding new ways to see the labyrinth at St Anselm’s become more useful to our campus community.

Thanks for reading!  As I move out of summer slacker mode I have started updating the other pages on this blog with a slideshow in the Photo Gallery, additional Useful Links and a newly launched Chapel History page.  Please take a look and let me know what you think!

← Calling, Vocation, & Choosing the Smaller Box
Are You “Spiritual But Not Religious”? →